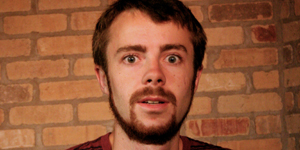 Geoffrey Asmus will be performing with the Monkey Business Institute and Toler Wolfe during our late night show The Merge this week. Buy your tickets now!

Onstage Geoffrey likes talking about his adult bed-wetting and that one first date where he went bird-watching. Most people say he’s got a cute butt and you should too! Other people say he’s a little ‘quirky’ and should stop stroking their hair.

Geoffrey’s self-aware sense of humor has been heard all over the Midwest through appearances in the Milwaukee, Madison and Cleveland Comedy Festivals. Geoffrey was a finalist in the 2014 Cleveland Comedy Festival, Comedy Club on State’s “Funniest Person in Madison 2014” and Acme Comedy Clubs “Funniest Comic in the Twin Cities 2013.” He has hosted for Mark Norman, Cameron Esposito, Jeff Dye and Ms. Pat and regularly performs at the Comedy Club on State in Madison, Wisconsin.

Win Tickets to our Longform Show

Win Tickets to The Merge