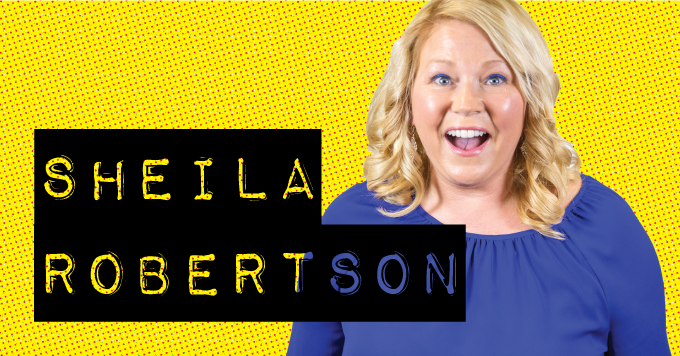 Bringing Improv To the People

Sheila Robertson has been performing improv, making things up, and – in general – winging it professionally since the early 1990s. She fell in love with improv comedy at 14 years old after seeing ComedySportz perform in Madison, inspiring an urge to become an improv comedian herself. Sheila began honing the craft of ‘Yes, and…’ by performing, DJing, and MCing hundreds of shows all over country, including Chicago, New York, and Los Angeles. At one point she was performing four shows a week. These days, she can be seen doing shows, teaching improv, conducting Playshops, and making up songs and musical comedy with Monkey Business Institute’s The Music Department. Sheila is also a founding member of the all female improv show Yes Ma’am and loves being a professional Fun Haver.

Improv training has influenced my life from a young age. I’ve been able to use the improvisational theme of ‘Yes, and…’ in relationships, business, adventures, and life. It allows me to create quick connections, be present and engaged in the moment, think big, take risks, think creatively, and be open to possibilities that I can’t imagine on my own. – Sheila

Through the years with Monkey Business Institute, Sheila has taught countless Playshops to small groups, large groups, small non-profits, large corporations, school-aged kids, grown ups, and even a bunch of rowdy librarians. “Teaching the basic concept of improv to beginners is one of my favorite things. I absolutely believe that if people adapt their life to include just a little bit of the concepts used by improvisers to put on a fun show, the world will be a better place.”

Outside the comedy world, Sheila is an accomplished sales professional, becoming a top salesperson in several different markets, from small local businesses to large national franchises. She credits her success to improv comedy, in particular the way it forces performers to be attentive listeners, as well as being open to the ideas your scene partner throws your way.

Sheila is ready with the perfect ice breaker for any meeting and hosts a Friday at 4pm Dance Party at her work.

Improv In the Wild