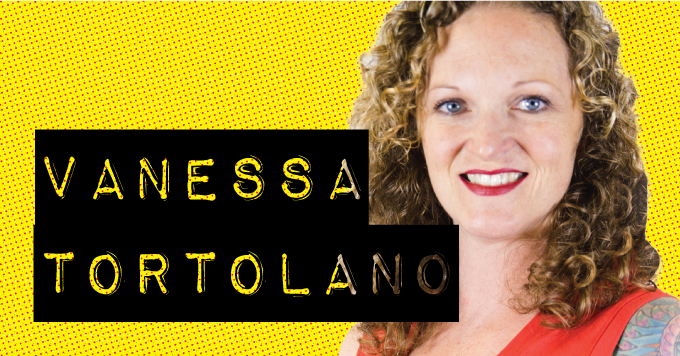 In addition to being a Monkey Business Institute cast member, Vanessa Tortolano is a stand-up comic, an entrepreneur (she is a co-founder and co-owner of NessAlla Kombucha), a musician, a scholar of herbs and natural healing, and a badass mother. Hey, Vanessa – save some talent for the rest of us! Learn more about Vanessa below, including how she came to be a cast member, what it’s like doing stand-up and how it compares to improv, and projects in which she’s involved.

It all started with a little bit of kombucha.

A roving, rakish, rabble-rousing renegade reporter – Dylan Brogan –  was doing a story on the local food scene. He tried some booch. He loved the booch, gave Vanessa some tix to an upcoming MBI performance, and she fell in love, knowing that this is where she needed to be – on stage with a bunch of other weirdos, having a blast in front of an audience. A classic booch-for-improv-classes swap-a-roo took place and Vanessa became a troupe member in 2012. And it’s all thanks to the booch.

Today, Vanessa performs with Yes Ma’am, the popular Improv Lab show featuring the Women of Monkey Business and hosts The Merge. The Merge is our stand-up/improv mashup and Vanessa is in charge of coordinating talent – scouting up and coming local and regional stand-up comics

New Adventures in Being Funny

Vanessa started doing stand-up about three years ago, which is still pretty fresh for stand-up comics. In that short amount of time, she’s found herself onstage in all sorts of venues, locally and other states. Including Lady Laughs Comedy Festival, Madison Comedy Week, State Street Comedy Club, and even some time on stage in New York City.

See Her Around Town